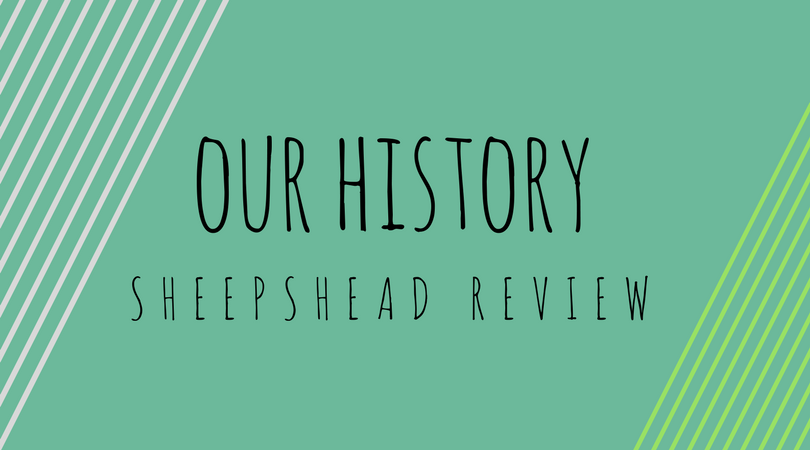 The first issue of Sheepshead Review (then called Sheepshead Revue) went to print and was distributed on the University of Wisconsin–Green Bay’s campus in 1975; just ten years after the university opened its doors. The publication, made up of creative writing and visual art, was printed on and off for the next 24 years, and then dropped out of circulation in 1999.

Four years later, the creative community on campus started to stir, and a dedicated group of students and faculty decided to revive the journal. After much planning and preparation, Sheepshead Review was re-launched with the spring 2003 issue. There has been a journal of at least 80 pages produced each spring and fall semester since then, with no sign of letting up. In that same year, the Rising Phoenix Award was established to recognize the best visual arts and writing artists.

As of fall 2007, Sheepshead Review launched into full color to fully display the quality of works submitted. Sheepshead Review is still made up of fiction, poetry, and visual art. The Rising Phoenix contest is also featured each spring. In addition, the journal now includes creative nonfiction pieces, acclaimed author interviews, and special sections revolving around a specific theme.

People Behind the Pages

The staff typically ranges from 20 to 30 students. Our goal is to produce one journal of creative work to showcase the University of Wisconsin-Green Bay students, faculty, staff and the Wisconsin community each semester

Curious About the Name?

How exactly did Sheepshead Review get its name? Sheepshead, which is a popular card game played in Wisconsin, was the inspiration for the title. The card game originated in Germany with the name Schafkopf, which literally means “sheepshead”. The name was picked in the 70s, with Review being Revue. The switch was made in 2003.